@pemmemedia brought all this gear with him to film in SE Asia, the #cametv #single #gimbal included with a #bmpcc and #nikkor lenses! ・・・
This gear was used when shooting for one week in SE Asia. via Instagram http://ift.tt/1Y2wWoh

Our Latest Featured Customer Video Is With Simon Shasha Who Pairs The Latest Blackmagic Design Micro Cinema Camera With Our CAME-TV Came-single Gimbal Stabilizer and the Blackmagic Micro Cage To Produce His Video 'training Day'.

Hi guys, my name is Simon Shasha. I am an independent-filmmaker living in Sydney, Australia. I grew-up in a very low-income, working-class family. Film and Cinema have always helped me escape reality when I needed too, and further my understanding of the human-condition. I believe that filmmaking is the ultimate amalgamation of all the arts. My ultimate goal is to create films that address the human-condition. I want my films to be powerfully empathetic and allow the audience to experience life in someone else's shoes. For work and income, however, I create live-event videos for many famous musicians that come to tour in Australia (a showreel of my live-event work can be seen here:https://vimeo.com/70929158). Live-event video production is very exciting, energetic and kinetic, and requires a filmmaker to be able to adapt to the situation - there are no storyboards in live-event video-production - so you can never truly be prepared - you just have to adapt to each situation as best as you can and be confident with the decisions you make as you shoot.

I already owned a CAME-TV 7800 3-Axis Gimbal. When I found out that I was selected as a beta-tester for Blackmagic's Micro Cinema Camera, I decided that a small, light, single-handed 3-axis gimbal was needed. Having been impressed with my CAME-TV 7800 gimbal, and after seeing the other single-handed gimbals on the market, I decided that the CAME-TV Single was the best choice based on specs and quality.

Yes, very often! I now use it even more than my CAME-TV 7800. The CAME-TV Single is just so simple and fun to operate! And the battery lasts FOREVER!

What is your typical camera setup when using our CAME-TV Single?

My favorite film of all time is the French film "La Haine". Not only is the story, acting and direction great, but the cinematography too. The cinematography it uses, in my opinion, is very a pseudo-documentary style - though it is a cinematic film, the photography is very realistic and reminiscent to the lighting and camera movement you'd usually expect to see in many documentaries - it is very raw and gritty. My other favortie films, such as "Amores Perroes", "City of God", "Children of Men", and the commercial and music-video work of French director, Romain Gavras, also employ this technique. I usually try and aim for this style when shooting with my films and live-event work. I do this because I feel that the realness and rawness of this technique draws the viewer in more and allows them to feel as though they are really there - thus immersing them in a more subjective experience with the film's environments and characters.

Yes! Especially if you want to achieve cinematic camera movement with a small and easy to use kit!

I try and shoot every weekend - even if I will never use the footage. I believe it is the best way to learn and master technique.

I like that it allows the creation of very cinematic camera-movement - and it does it while being compact, light and easy to set-up!

I believe video/filmmaking is a very powerful art-form. It has the power to influence hearts and minds, and allow people to feel things - truly feel things. I really believe filmmakng can make the world a better place by means of subjective immersion and empathetic response. My inspiration comes from wanting to contribute to that goal. From a technical-aspect, I draw my inspiration from from my favorite director's (Terrence Malick, Alejandro González Iñárritu, Wong Kar Wai, Chen Kaige, Zhang Yimou, Spike Lee, Chan-wook Park, Takeshi Kitano, Christopher Nolan, Darren Aronofsky), my favourite cinematographers (Christopher Doyle, Emmanuel Lubezki, Rodrigo Prieto, Roger Deakins, Matthew Libatique, Jeff Cronenweth, Jordan Cronenweth) but also from commercials and music-videos too (mainly the work of Jonathan Glazer and Romain Gavras).

I don't necessarily have a favorite type of shot, however, I like when a shot is so immersive that even I forget that there is a camera there. This is why I like the work of Terrence Malick so much; I feel his use of only natural-lighting creates a very natural, immersive and subjective experience

The CAME-TV Single is truly a great-product that opens up an entire world of camera-movement that was just not feasible before - and it does it with a very small footprint at a very affordable price. I recommend it to all filmmakers, but I highly-recommend it to other filmmakers that are like me; low-budget filmmakers that usually work alone and have a very "run and gun" style of cinematography. It really is an amazing piece of kit!

How was your experience with our Blackmagic Micro Cage?

For more information on the CAME-Single gimbal and the CAME-TV BMMCC Cage click below! Make sure to also sign up for our newsletter to receive updates and information on any new products we release. 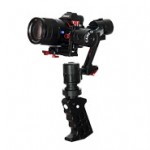 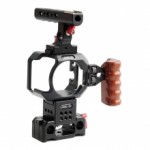 @pemmemedia posted this pic of his #cametv #single #gimbal setup with his #BMPCC and #nikkor24mm AI-S lens!
・・・
Field test #3 Use a gimbal when you want super steady shots. The #cametvsingle pistol grip gimbal is easy to travel with and is a breeze to setup. #cametv #lanparte #lanc #bmpcc
via Instagram http://ift.tt/1Tlxd6V

MrCheesycam, uploaded this detailed overview on the new CAME-TV ARGO gimbal were he unboxes, balances and goes through some of the operating modes. The camera he balanced on the ARGO was his Panasonic GH4 and Sigma 20mm f/1.8 lens.

All the motors on the brand new CAME-TV ARGO are equipped with encoders, which makes the gimbal perform more accurately and precise. It comes with a pre-calibrated 32-bit ALEXMOS board and a wireless joystick that you can control and switch to different operating modes. The ARGO comes with a hard case that can fit all the pieces of the gimbal and also the carbon fiber foldable stand. 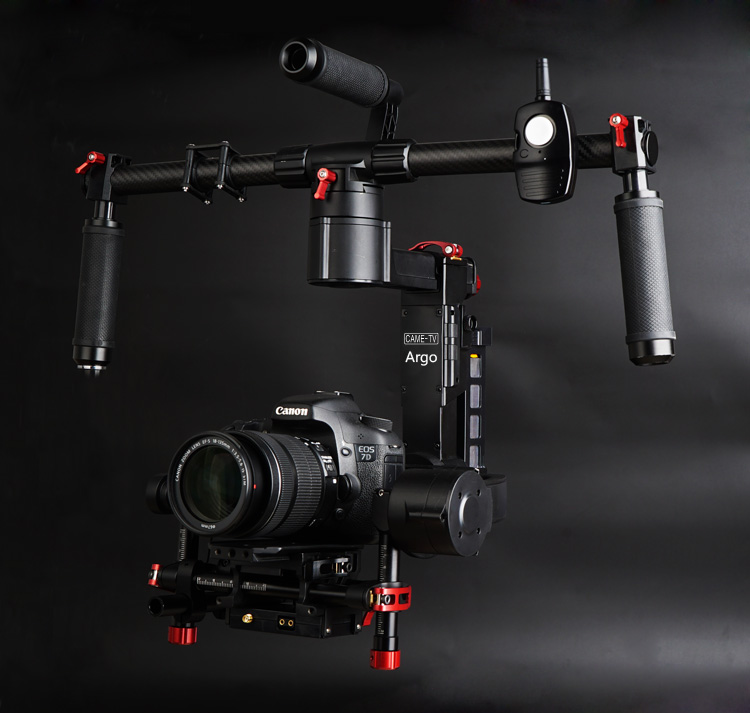 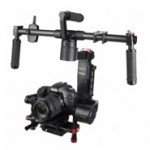 Brandon Rice Films, shared this wonderfully shot video called "Adrienne + Sean - A Love Story", which was filmed with the CAME-TV Mini 2 gimbal balanced for a Panasonic GH4 camera plus a Rokinon 12mm lens.

The CAME-Mini 2 is an extremely portable gimbal that has a max payload of about 2.6 lbs. It's perfect for lightweight micro four-thirds/mirror-less camera setups, just like the setup that Brandon Rice Films used for this video. The Mini 2 comes with a padded carrying case and a balance stand, which can also fit in the case when it is broken down. Balancing your camera setup on the Mini 2 is made easy because it's completely tool-less and any micro balancing adjustment to the frame can be done practically on the fly. 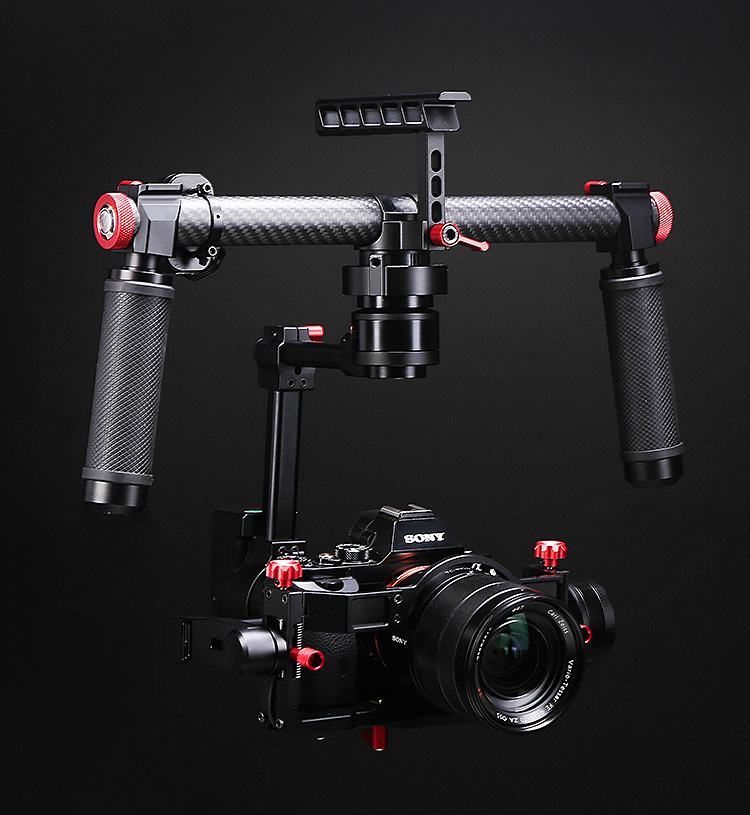 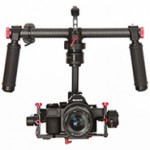 A few common questions that we receive from customers regarding our gimbals are (A) Does my camera & lens combo work? and (B) What is the gimbal's maximum payload?

Though this information can be found on all of our gimbals' respective product pages, below you will see a quick index showing the appropriate camera types along with the maximum payloads that each gimbal is designed to support.

Mini 3
Cameras supported - Smaller to medium-sized DSLR and mirrorless cameras, including BMPCC, Panasonic GH4, Sony A7r/A7s series, etc. with lighter lenses.
Maximum Payload (including lens & accessories): 2.6 lbs / 1.2 kg
Note regarding lens adapters: We strongly suggest that only native lenses be combined with your cameras while being mounted on these gimbals. Lens adapters such as metabones will add excess weight to the setup (plus usually attached to heavier lenses), which will exceed the max payload, and prevent your gimbal from balancing properly.

CAME-Mini 1, Mini 2, Single, Optimus,
Cameras supported - Small mirrorless cameras, including BMPCC, Panasonic GH4/GH5, Sony A7r/A7s series, a6300, etc. with lighter lenses.
Maximum Payload (including lens & accessories): 2.6 lbs / 1.2 kg
Note regarding lens adapters: We strongly suggest that only native lenses be combined with your cameras while being mounted on these gimbals. Lens adapters such as metabones will add excess weight to the setup (plus usually attached to heavier lenses), which will exceed the max payload, and prevent your gimbal from balancing properly

HDVideshop Berlin, uploaded this quick overview of our new CAME-ARGO 3-axis gimbal. The video goes over the main features of the ARGO and how easy it is to setup. In the beginning of the video, he has a Sony A7s with a Zeiss 24-70mm F/4 lens balanced on the  CAME-ARGO.

The CAME-ARGO features a 32 bit Alexmos board and is completely tool-less, which makes balancing your camera on the gimbal a breeze. A wireless remote is included with the CAME-ARGO, which allows you to control the gimbal from a distance and also switch to different operating modes. There is a D-Tap output on the bottom of the gimbals frame, allowing you to power accessories like a wireless follow focus. 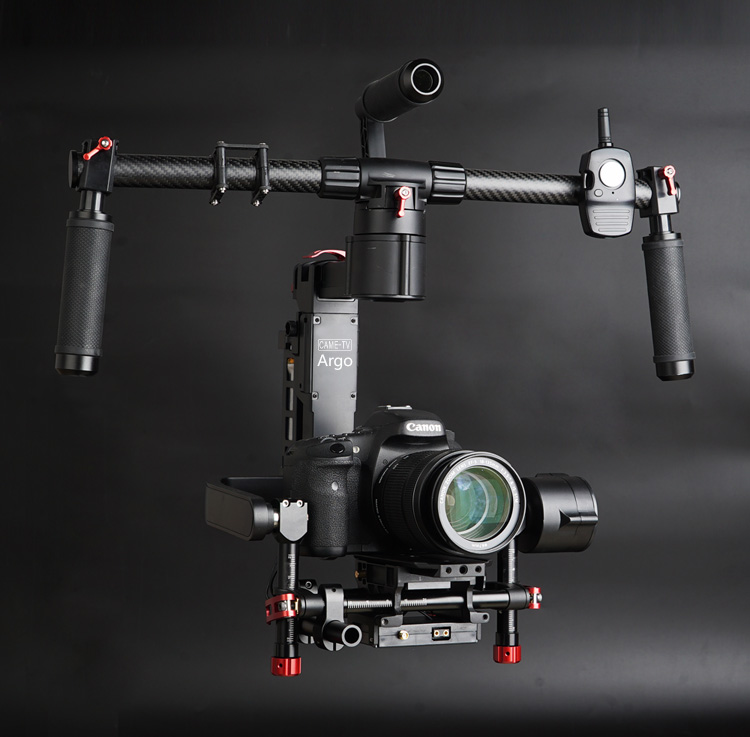 In the video, the CAME-Single is used for tracking the subject as he walks toward the van before ultimately getting in it. The van then drives off and we slowly follow as it starts to leave the parking garage. With a max payload of 2.6 lbs, the CAME-Single is designed to be portable, easy to balance and used with just one-hand. The encoders on the CAME-Single enhances the gimbals performance by preventing the motors from losing sync, increasing the torque/stability and decreasing the power consumption - allowing the gimbal to last longer. 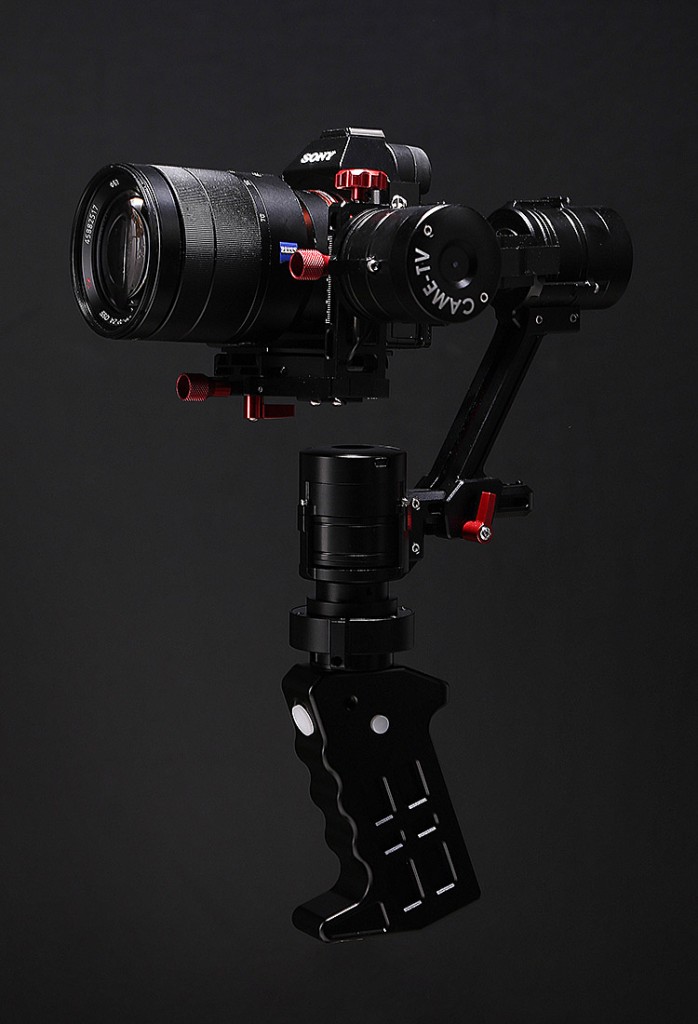 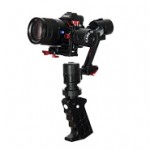 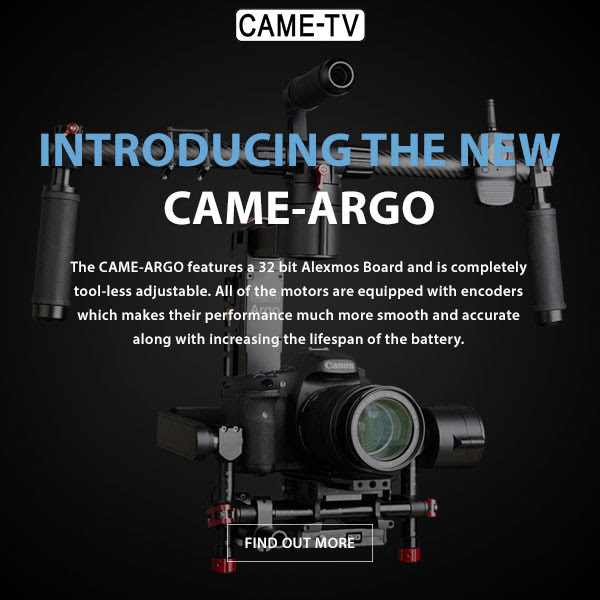 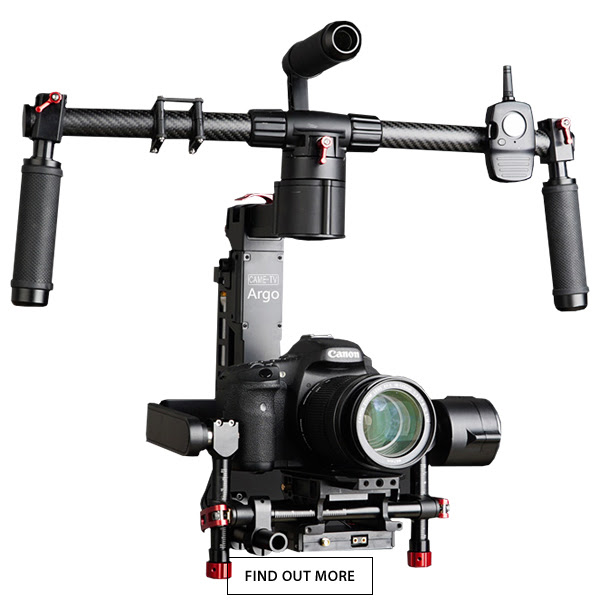 If you want to get some helpful filmmaking tips from @tom_antos and check out some #cametv products, make sure you check out his filmmaking seminar!
・・・
Almost setup for the first filmmaking seminar. @cametv is here helping us and showing off their latest products
via Instagram http://ift.tt/1oDYtAB